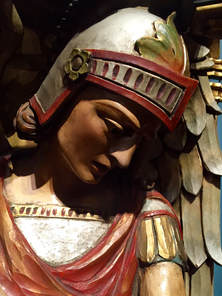 Shrine of St. Michael, our Patron
The Church of the Ascension was founded in 1857 as a mission of St. James Church (now the Cathedral for the Diocese of Chicago). Parishioners worshiped and served at various sites in the neighborhood before ground was broken at our present location for St. Faith’s Chapel (now St. Michael’s Hall), in 1873. The consecration of the present church on Ascension Day 1898 was described in The Living Church as "… one of the greatest functions ever held in the Episcopal Diocese of Chicago."

Since 1869 the parish has been in the forefront of the Anglo-Catholic  tradition in the Episcopal Church. Early, highly-publicized conflicts with the Bishop of Chicago over all things pertaining to worship later gave way to Ascension’s national leadership role as the Episcopal Church, throughout the twentieth century, increasingly embraced every-Sunday Eucharist, practices such as reserving the consecrated sacrament and greater appreciation of ritualism and all the sacraments.

A history of the parish in its early years already notes that, "music which accompanied worship at the Church of the Ascension was widely known for its beauty and general excellence," – a commitment for which the parish continues to be widely known today.

Alongside of the parish’s enduring Anglo-Catholic identity and commitments to reverent worship and glorious sacred music have been outreach endeavors that have included off-site evening language programs for immigrants, neighborhood and regional evangelism and preaching missions, a parochial school and an ongoing monthly food pantry ministry. Ascension became uniquely multi-racial in the mid-1950s, and we continue to value our diversity in race, socioeconomic status, age and sexual orientation.

A written history of the parish through the early 1980s and still available in print at the church and online is titled History of the Church of the Ascension, Chicago, Illinois (1857-1982), by George C.Giles, Jr.  The Introduction by Thomas C. Reeves, former Historiographer for the Episcopal Diocese of Milwaukee, provides an excellent background that is titled The Oxford Movement and the Midwest.

Worship the Lord in the beauty of holiness."